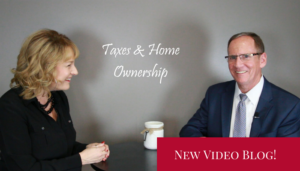 I’m excited to be here with Joe Gehrki of CBS Homes Real Estate!  He is someone I consider a leadership mentor, a friend, a peer, and a fantastic manager. In terms of how real estate companies roll, I have to say I dig CBS if I had to pick another company to like besides my own!

I brought him here today so we could talk about what is going on in Congress, an issue that people need to be aware of that will affect their home ownership and taxes they pay.

Joe: The biggest thing is the tax reform this year with mortgage interest deduction. There is going to be a major change one way or the other. It sounds like there will be a bill on the President’s desk by Christmas, and it will be a bill that will change the tax structure of the United States. Mortgage interest deduction has been a mainstay for homeowners that felt they could count on that deduction. And come Christmas, it might not be a guaranteed deduction. That’s the big issue right now that we’re dealing with at National Association of Realtors.

Lisa: It’s a big deal.  And why Joe is so great to talk to us about this is because he is an FPC.

Lisa: What I think is particularly interesting, that I’m watching carefully, is that they are looking to making capital gains tax a thing, you have to be in your home for 5 of the last 8 years instead of 2 of the last 5. And it’s not clear on when that would go into effect. Is that true?

Joe: That is true. The House bill was 2019, and the Senate bill said 2018. So we wait to see what comes out of the conference, that’s where they get together and mash the bills together.

Lisa: And once this comes up, even if it loses this year it can change again the following year. My point is to motivate a couple moves for those people who have been thinking of making that discretionary move up to the next level, this year might be a good time to do it.

Joe: And we will know soon which year will go into effect.

Lisa: And it’s important to make your voice heard.

Lisa: So many people think that their voice doesn’t matter, that that dollar doesn’t count. That vote doesn’t count, that call won’t matter.  I’ve been in involved with too many political issues to know…that’s simply not true. Our voices, our dollars, our calls, they all matter. If it’s important to you, take the time to pick up the phone and call your Congressman.